I have always been interested in sound and sound generation. From the early days playing recorder at Woodroffe Elementary School to soundscape explorations discovered and recorded while meandering around N. America in the 90’s and beyond.. I’ve always been passionate about sound.

Through the years I have maintained a ‘fair modicum’ of musical ability by continuing to play~ poorly~ the mandolin. I have composed folk inspired songs of angst but my love has always been “Soundscape Generation.” Thus, the tools needed for recording, modifying, and morphing said recordings in to flowing, fluid, and appellant auditory sculptures have slowly.. ever so slowly entered my realm. 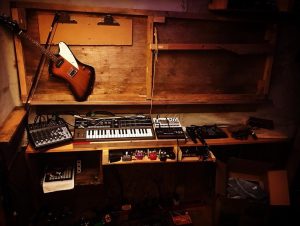 Tools such as “Piezo- Electric Pick Ups,” Korg Volca’s- Sample, Beats, and Keys.. along with Korg’s “Mini Korg” (c/w vocoder).. and plethoric effects pedals dedicated for the Electric Mandolin (pictured: my “Mandobird“), Vocals, and electronically generated/ relayed sounds. I am a self- taught musician and engineer.. using a variety of tools for to produce sounds such as the eBow, a Violin bow, and more.. industrial tools such as a grinder and steel drum.

My sonic vision for produced song- based creations is a combination of Folk stylings with Industrial/ Punk inspirations leveraging a dual microphone configuration for, both, heavily processed and clear/ unadulterated vocal signals augmented with heavy keyboard and beat based sounds where Beats may be tablet generated with Novation’s Launchpad interface (2x).

My vision for Soundscape Production is to Percussively Interact with Public Art for reinterpretation of said works based on the unique sound qualities discovered on different faces and/ or locations. All interactivity is Non- Destructive and respects the original work.

I have always been a “working artist.” As such, I have only been able to add new equipment sporadically.. upon fiscal affordability. Thus, it has taken me a very very long time to reach the point I am at presently. In recent years, however, I have worked extremely hard to bring together the final pieces of the puzzle.. the Volca’s and Micro Korg along with the Novation Launchpads to name but a few. I am, now, looking to sequester productive time in order to initiate release of various pieces that are cohesive with my creative vision.